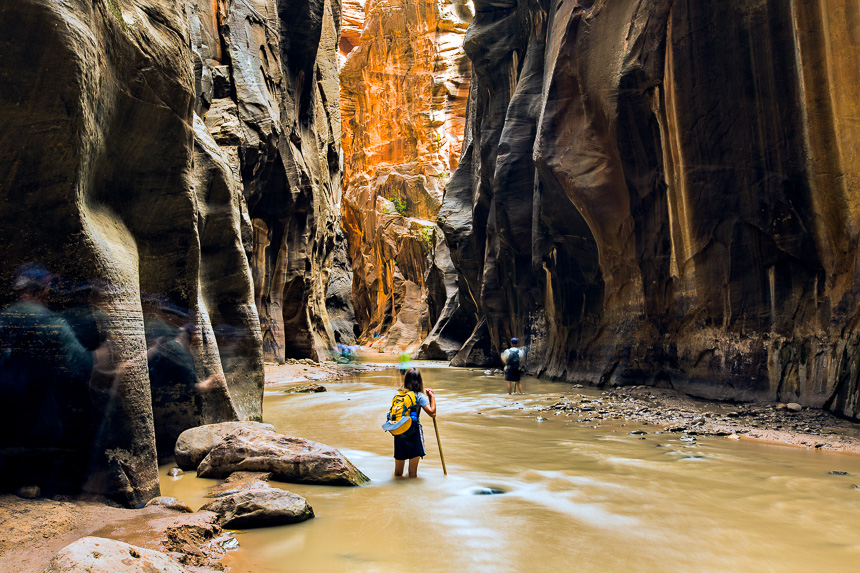 The Virgin River Narrows is one of the most popular hikes in the park for good reason.

Walking through the shallow river between towering sandstone walls–weathered by years of erosion–is quite a mystical and beautiful experience. During the peak summer months, thousands of people come here each day. So I made sure that I was up dark and early for this hike, first on the trail. I also wanted to be there for the soft morning light in order to take a great shot. This giant rock in the middle of the narrows was quite peculiar and the soft lighting through the narrow walls made this scene particularly interesting. Using a polarizer and a tripod, I bracketed 5 stops to capture the full dynamic range. There was quite a contrast between the bright light at the top of the canyon and the shadows along the floor. The result is this HDR image, processed in Photomatix and digitally blended in Photoshop with the original 5 bracketed shots. Thanks to Dave Morrow for the tips on how to process this!

In the late morning the masses descend on The Narrows, and it can feel like a busy theme park rather than a pristine nature preserve. On my way out, I encountered a girl who took a rock out of this natural shelf in the wall and used it to scratch “I WAS HERE” in the wall. I couldn’t believe I was seeing this act of vandalism first hand literally 10 feet from me while I had my tripod and camera set up. She paused and looked as if she was thinking about what else she could write when I decided to speak up. I got her attention and said to her, “Would you mind not doing that? I think it’s a little disrespectful to others.” She retorted, “It won’t last.” I shrugged my shoulders. She repeated her words, as I stared at her. She paused, threw the rock back into the shelf, and walked towards her mother in the river. The mother said something to her then continued on, but the girl stayed put. During this whole exchange I was ready to take a shot up the canyon, hoping that my neutral density (ND) filter would filter out the people as long as they continued to move. The girl remained gazing upwards at the walls, slowly looking left, then right. It was as if she was noticing the walls for the first time–perhaps she was appreciating the grand spectacle of where she had traveled to. At that moment, I decided to snap a shot of her. 35mm, ISO 100, f/22, 6 seconds, 3-stop ND filter.