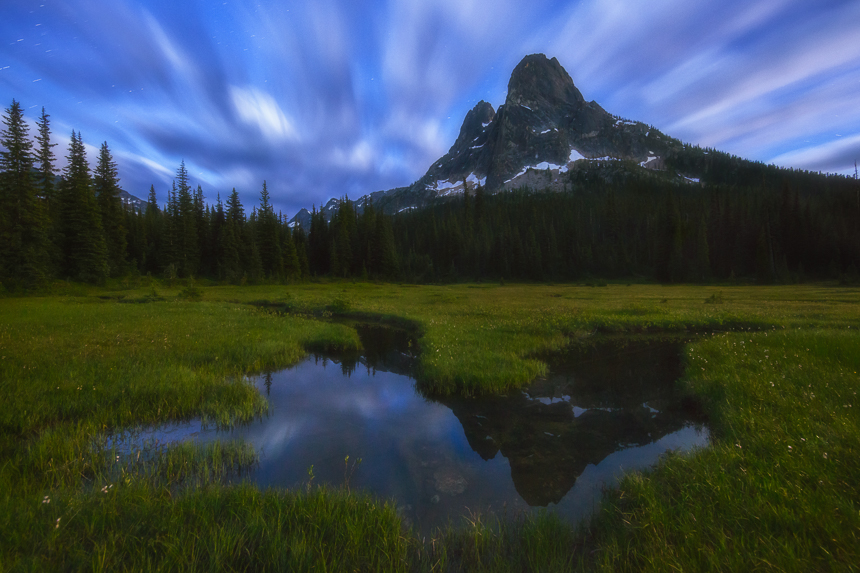 Lush, Rugged, & Wild – This is Washington

My intention for 2015 was to spend some quality time photographing the Pacific Northwest. Oregon and Washington, after all, are inhabited with outdoor enthusiasts for good reason. The land is incredibly diverse, having beautiful coastal areas, mountains, forests, waterfalls, and even deserts, and accessibility ranges from very easy to experts only. Staying close to my home base in Seattle was a nice benefit as well. This post will feature the Washington Spots, and look for part 2 featuring the Best of Oregon.

The Washington coast is a favorite among locals who have often spent childhood vacations out there. Located over 5 hours away from Seattle by car, or a bit less taking the ferry, it is still quite a trek to get there. The beaches are fairly rugged, sea stacks rise from the sand to create strange structures that are habitats for rugged trees that can lay roots in the precipitous rock.

One of my favorites was Second Beach, accessed by a short hike in, this hidden gem opens up to a huge area with silky fine sand and large rocks to explore. The forest extends right up to the beach so campers struggle to find space to pitch a tent that won’t get washed out by the incoming tide.

Clear nights are extremely rare along the coast. I was blessed to be able to capture the stars and the Milky Way at this idyllic spot.

Another great beach is Ruby Beach with an allure of a simple setting that can be quite dynamic. This image was captured at blue hour, well after the sun had dipped below the horizon. Venus shown brightly even as the last rays of the sun were filtering through the atmosphere.

Venturing inland from Ruby Beach, the legendary Hoh Rainforest awaits. One could do a short hike, or explore 20 miles deep into the wilderness. Moss grows abundantly here, nearly as abundant as the energy and mystery that is present in this land.

Along the hike there seem to be things that resembled faces: a gnome like mushroom, and a tree stump with the profile of a lady. I captured this being in our campfire late that night. One of the pleasant waterfalls in this area is Sol Duc Falls – I remember a simple photo of these falls that I bought at the visitor center years ago. It has served as inspiration to me for many years so I decided I had to go see it for real this time. Nothing fancy here. Just a beautiful cascading flow and a lovely walk through the forest.

This dominant volcanic mountain in the Cascade mountain range can often be seen from Seattle on a clear day. However it’s true majestic qualities must be appreciated up close. The park is large and the road basically routes one around the mountain, as if to show off each of its intricate faces. A popular vantage point from the south is Reflection Lake. My time at Rainier was a lot of early mornings and late nights. With sunrise at 5:30am, being in position here meant setting the alarm clock at a brutal 4am.

The mountain has become quite popular for night photographers to get a shot of the milky way and the mountain, and with clear skies showing on the weekend weather forecast, it was sure to be busy. Such is the state of nature photography these days! Another photographer, Victor Poon, who was visiting from Hong Kong, and I kept running into each other around the mountain. It seems we had similar ideas of where to shoot each day. We convinced each other that hiking in to look for a night shot was a good idea so at 1am we were on the trail passing many photographers taking up positions near the parking lot. The hike was worth it and we got there just in time for the alignment (as we had planned). Instead of dealing with massive crowds we shared a spot with four other chill photographers who were shooting a timelapse sequence. The magic of the mountain and the heaven’s was in full on display–I couldn’t have been happier to share this experience with a small group of photographers.

Victor and I decided make it an all-nighter and stay for sunrise. We had hiked in to the spot in dark so we didn’t really know what the surrounding area looked like. As first light began to fill in we were gifted a most incredible reveal in 360 degrees of the glory that is Mount Rainier National Park.

The most rugged part of the state is located in the Northern Cascades. Mountains and alpine lakes dominate the scene here, but roads are scarce and trails involve a fair amount of distance and elevation gain. I had driven up here for the night as conditions looked promising. As I neared the location in the afternoon rain clouds began to form which were totally not in the forecast! I arrived to gloomy looking conditions and decided to wait it out the van. I periodically checked outside to see if it was getting better, but it wasn’t. At some point near sunset I decided it was time to go out and setup regardless of what it looked like. To my surprise the weather was rapidly changing, a full brilliant rainbow was forming over me! I grabbed all my gear and ran out of the van. I was a flurry of mixed emotions: full of shame for missing this moment sitting inside waiting for the rain to stop, and so excited that this was actually happening! Pumped full of adrenaline and a side order of anxiety flowing through me, I setup at the first spot that looked any good. The scene was so big that I had to go with a pano and reeled of this sequence. I will be back for more from this part of the state for sure!

Once Upon a Time
The Northern Cascades, Washington

Each year there is more demand for the amount of permits they offer to camp in the backcountry of the famed Enchantments. My buddy, Fadi, and his lady Reham, were fortunate to secure a lottery backcountry pass and invited Megan and myself along. The pass was for Stuart Zone, which is not ideal for visiting the Core Enchantments Zone because the distance is still formidable for a day hike. I won’t bother to go into too much detail about this, but the distance proved too much for our group and we made it halfway up Asgard Pass and turned back. Rounding out the day with 11.5 miles and returning to camp at dusk exhausted.

Located at the south end of the state near the Oregon border is the magnificent Panther Falls. A slippery descent drops one into a verdant garden of may apple and moss. The ever flowing water at this location keeps the vegetation healthy and the visitors glistening wet. However with an increase in traffic, much of the plant life is struggling and a muddy mess is starting to form at the base of the falls. If you do visit this location please do be careful where you step as to not damage the plant life any further. This falls unique mossy tendrils make it one of the best waterfalls in the state.

So there are some of the wonderful places I visited this year! All of my above images are available for prints and licensing. If you enjoyed this post please take the time to share it – it really does means the world to me – much love and gratitude!