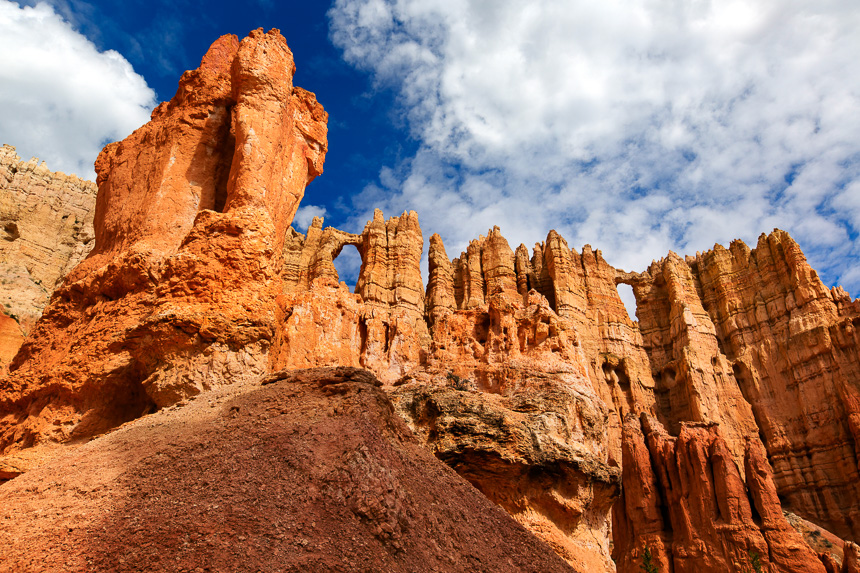 After about 10 weeks on the road I arrived in Bryce Canyon National Park, exhausted and drained of creative energy; to be honest, I was hardly excited to be there. Going through the motions, I set up camp and then stopped by one of the main view points of the Bryce Amphitheater. As I peered over the rim on the iconic view I was awestruck.

Sunset Point at Sunset
This place is spectacular and vast! At the same moment I was also hit with feelings of anxiety and fear, “How am I going to photograph such a place and do it justice?” I snapped off a couple of mediocre shots and began to plan my days (the shot above was taken on a following day). Since Bryce Canyon faces east, sunrise is the best time to view the structures. The late evening light seen above is still beautiful but fairly flat and certainly less dramatic than the morning. The first day I went to Sunrise Point to witness purple and pink clouds lining the sky and the yellow glow of the sun illuminating hoodoos in the amphitheater. This is why I get up at 5:15 in the dark…

A Majestic Morning
Following that epic sunrise, a walk through the Queen’s Garden, Peek-a-Boo Loop and exiting through the Wall Street section of Navajo Loop rounded out the full morning. The Wall of Windows was particularly impressive with intricate towering walls.

The Wall of Windows
The summer monsoons came rolling in as expected and rained out the afternoon. The evening cleared up for a visit to Bryce Point where a storm to the south was brewing. Soon lighting strikes began to happen nearly every minute! As the light levels dipped I was able to capture some of these bolts which I’ve stacked together to create this composite image.

Lightning Over the Amphitheater
Feeling like that would be hard to top, the next morning I ventured into Fairyland at dawn. Duly named, this part of the canyon is a fantasy land. Tall Juniper & Pine, desert flowers, hoodoos, and sand dune-like-mountain ridges make up Fairyland Canyon. While wandering this solitary trail it’s so easy to imagine one has been transported to another land. The hoodoos at Bryce Canyon are spectacular and deservedly get many photographers’ attention, but what I really love at the park are the sand dune hills–the remains of fully eroded hoodoos–that have orange, pink and white hues. This off the beaten path trail lived up to its name. Here is a vertically stitched telephoto shot of a hillside as the morning light was dancing with it.

Bryce’s Fairyland Mountains
This is my favorite scene of the trip so far, and I would love to see Bryce display this shot in their visitor center–blown up huge! What do you think? Needless to say I had a great time in Bryce.